Angharad James was the daughter of a relatively wealthy yeoman farmer of Gelli Ffrydau in the Nantlle Valley. Aged twenty, Angharad married Wiliam Prichard, a man forty years her senior, and joined him at the farm he rented from the Gwydir Estate in Penamnen Valley, Dolwyddelan, north-east Wales. They had four children: Gwen, Margaret, Catherine and, the subject of the elegy, Dafydd.

Only ten poems by Angharad survive, most of which were free-metre poems sung to popular tunes of the day. But her poetic activity also had an antiquarian edge: she practised strict-metre poetry, the preserve of the medieval professional guild, and collected and transcribed manuscripts of Welsh poetry. Her personal manuscript, ‘Llyfr Coch Angharad James’ (Angharad James’s Red Book), was last seen in the middle of the nineteenth century. It was named because of  the colour of its leather binding and not its content.

The elegy for her son is a cywydd, one of the most commonly practiced bardic forms, especially in terms of formal bardic elegy. Angharad composed the elegy in a strict-metre form that was in decline in Wales as a whole, yet still retained some kudos in the vibrant amateur bardic culture of her locality. 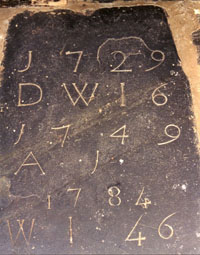 ‘Angharad James’s lament for the loss of her son Dafydd Wiliam, 1729’
(extract)

There was a garden of green trees,
mild and dear and full of small plants,
very pleasant, full this year,
a day [or time] I have known, that belonged to me.
Cut from my garden was the most beautiful
solid shoot

(a tender one and fair),
Growing (strong and handsome,
comely and fine), likely
shortly to grow big and splendid
He was the Lilly of my garden, and he was handsome,
my principal comfort, should I have had him;
cornerstone, he was the best scholar,
high in esteem, he was the very pinnacle;
he was the head of my fair vineyard/orchard,
[he was] honest and the head of my household.
He was the main shoot/scion of my house,
He was the pinnacle of Penamnen.
…
Remembering Dafydd (beloved shrub),
I can remember his father about the place
and I must live without either one of them
(weak state), I desire [a place] for them both in heaven,
until the hour that I am brought
(genial ones), to them.
…
My hope is great and everlasting,
that I shall be allowed there after him
to my very own dear heaven,
God may [allow it], to join them both:
there we will have our blessing every day,
a second life of happiness.